As usual Marine Technics Group took part in this event and showed all realized activities.

Marine Technics always tries to provide the ship owners with new solutions responding on market needs and offering optimal combination of all parameters important for the customer. Every time our stand offers a zest: new and state-of-art solutions in shipbuilding. This year for the first time Marine Technics represented to a large audience MAN engine i6-730 with 537 kW, project of passenger vessel PS85MT to transport 250 passengers, and new hybrid diesel-electric propulsion unit for diesel-electric workboat (project ST23WIM-E), Koden-915 GPS/GLONASS Navigator for all types of vessels. 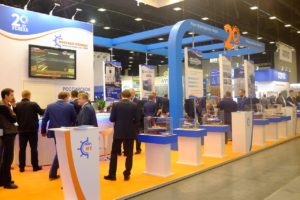 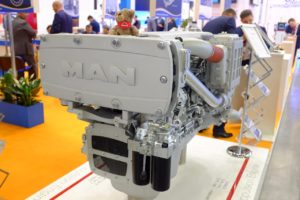 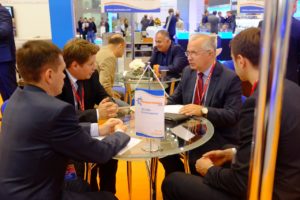 Pavel Kulikov, head of MT Engineering center: “Visitors were greatly curious and pleasantly surprised by such a wide range of new MAN diesel engines D2676LExxx having the best values of specific mass and cost-efficiency. Together with MAN representatives we have held several meetings with potential customers who are interested in MAN products. Agreements have been reached on different levels”.

Olga Andrade Lourenso, purchasing director: “During the exhibition we held a number of meetings with our principals, discussed current issues as well as future plans and prospects for the work. Moreover, we managed to reach the agreements on an exclusive representation of Elite Marine, manufacturer of ballast water treatment systems. We found a new producer of anchor chains as well. There were quite a lot manufacturers from Turkey and China. In general, the exhibition turned out to be very saturated and promising for us as exclusive representatives of world-leading brands”.

We talked productively with members of Saura, Tokyo Keiki, Skipper, New Sunrise, etc. concerning expansion of model range, logistics issues, RRR certification, and price policy for MT clients. It should be noted that these agreements will be extremely profitable for our clients. 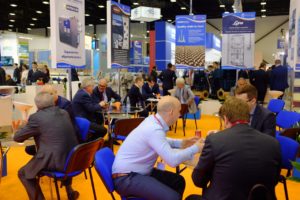 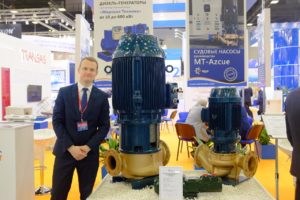 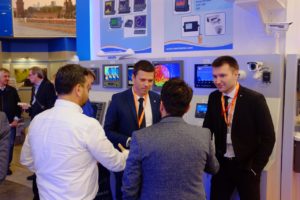 One of the most exciting events during the NEVA-2017 was the agreement between Marine Technics and Fluidmecanica (Spain) for joint production of deck equipment in Russia.

Joint production localized in Russia is an important step for our company as well as for whole shipbuilding market. It is the possibility to imbed cutting-edge technologies and to adopt the experience considering local specifics which will allow to offer ship owners favourable engineering and price solutions.

It is worth mentioning that it is not the first time of product localization for MT. At the beginning of 2017 the company started a joint production with Azcue Pumps (Spain), leading manufacturer of marine pumps. The products under MT-Azcue brand are highly demanded by shipbuilders: nationalized production allows to provide modern equipment developed under client’s needs by maintaining European quality and reliability.

Viktor Makarzin, head of Production Department: “During the exhibition we held a lot of meetings and negotiations with new companies offering marine equipment and spare parts. I will list some of them. For example, with our partners from Weichai we reached the agreement to low the price of products; with Sincro (generators) we agreed the optimal price. Important negotiations with representatives of Russian River Register were held and decisions for future mutually beneficial work were agreed”.

One of the most outstanding innovative products, which can improve manufacture of Marine Technics, became VISEDO inverter systems (Finland) which allow to collect power and to transform it for trouble-free operation. Now our engineers are developing this item and planning its usage for propulsion unit as well as for gensets. 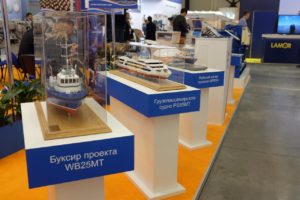 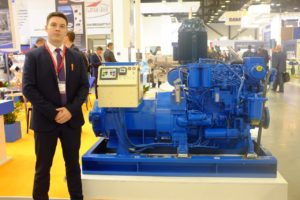 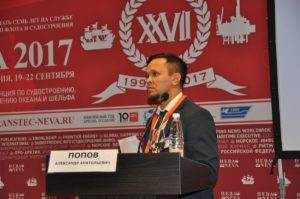 Visitors of NEVA-2017 got acquainted with the realized and future shipbuilding projects of MT Design Bureau: programme of fleet modernization and positive results of its implementation. Utmost attention was paid to our new projects.

Alexander Popov, head of Design Bureau: “During the event we participated in two conferences where we presented our current project of workboat ST23WIM-E with absolutely new hybrid genset propulsion and two concepts of passenger vessels. It has drawn the attention of potential customers and media: soon articles on hybrid propulsion will appear in two theme magazines”.

In general for Design Bureau the exhibition is featured as the possibility to occupy new niches not only in ship construction, but also in introducing new solutions for different purpose vessels.

Within the event several meetings with current clients and new ones were held concerning fleet modernization. We reached preliminary agreements to replace gensets with the equipment produced by Marine Technics: МТ-ВДГ 50ВСт, МТ-ВДГ 20ВСт, МТ-ВДГ 30ВСт.

During the meeting many current and future ship owners who are planning to acquire passenger crafts, were interested in high-speed fleet modernization. The most urgent issues were: Meteor improvement, its re-equipment with main ship systems, saloon chairs and propellers. Due to the extensive experience of hydrofoil retrofit programme Marine Technics is able to provide ship owners with optimal upgrading solutions. Today in Russia more than 40 hydrofoils are equipped with MAN engines. The ship owners give only positive feedback on fleet operation after its renovation.

Our stand became the area of meetings with APRST Association during NEVA-2017 where the company presented its production, Design Bureau, new ship’s projects, ecological equipment. Also we held a meeting with the Association of passenger transporters of Saint Petersburg in order to support programme of Meteor modernization and possibility of its financing. 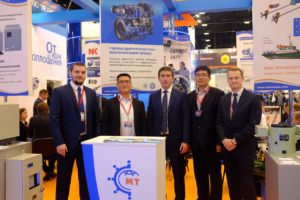 NEVA-2017 gave excellent opportunities to display the devices produced by Marine Technics to a huge number of clients because such event was visited by all members of Russia shipbuilding sphere. Products under MT brand attract unchangeable interest from shipbuilders: within the event we held meetings concerning the supply of marine equipment on active and future projects.

To sum up, we would like to note the importance of NEVA-2017 for shipbuilding market. Planes discussed during meetings and negotiations will be very soon realized by supplying the equipment, designing, modernizing and constructing ships. 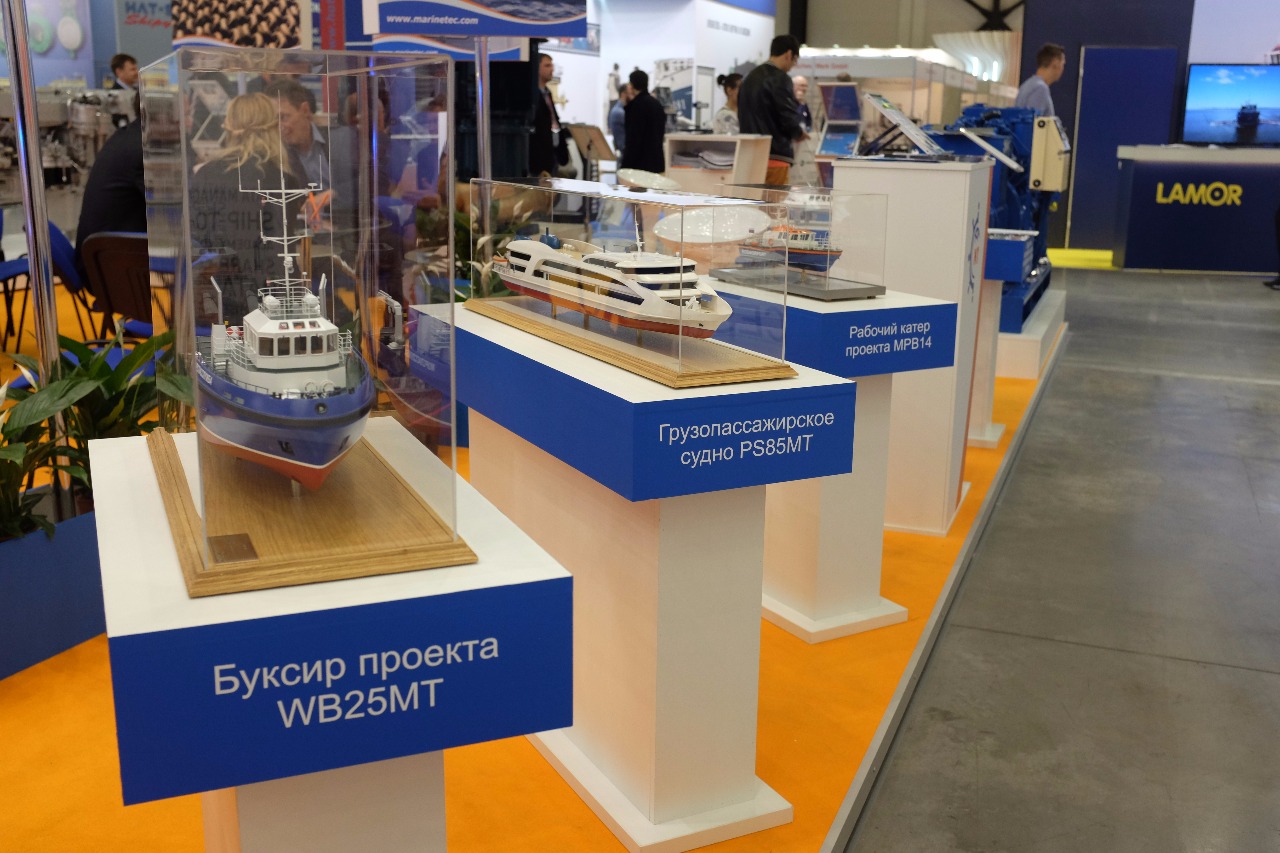